A coop retro game with Tetris, Pacman and shmup gameplay. 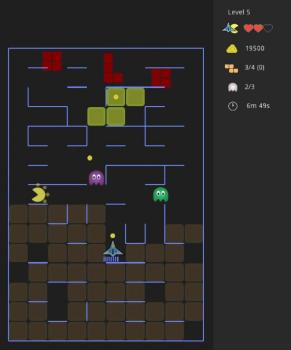 For linux users, a flatpak is available thanks to Jehan's contribution!

Run it from the Godot editor

Then download the Shooting Pactris godot project files, unzip it and open the project.godot file with Godot. From within the editor, press F5 to start the game.

This is the most secure way to go, instead of running the executables hereunder (but they are not evil, I swear).

If you know how to use git, it allows for easier updates.

Instead of downloading and extracting the zip file, simply run:

Subsequently run git pull to update your game to the latest version.

It is generally a really bad idea to download and run random software from the Internet! Although I affirm that there's nothing bad in these files, you don't have to trust me. See the previous section on running Shooting Pactris from Godot instead (then you can put your trust in Godot, which is mature software and whose team has been around for years).

The player(s) move around Pacman and the ship.

Red tetris pieces shoot at the ship and cannot be destroyed, or controlled. They eventually "become friends", turn to green and start moving down like in regular tetris.

Green tetris pieces cannot be controlled directly. Instead, they can be pushed left and right by Pacman, frozen-moved and rotated by the ship.

Every completed tetris line disappears and grants an extra frost beam! (Even 3 beams for 2 lines completed at once, 6 for 3 lines and 10 for 4 lines!)

An item appears in the maze for every 10 enemy bullets collected.

This is the easiest way to play Shooting Pactris (although it may break friendships).

You wanted it hardcore, here you go.

You can always use the following keys to move Pacman or the ship, be it:

Contact me to report bugs or submit an issue to the git repository.

You can also create new graphics for the game by simply replacing the existing images.

You are more than welcome to contribute code to the git repository.

The project does not need money. You can donate to Godot instead!

Shooting Pactris is Free Software under the AGPLv3. You can use, share, study and improve it!

You may drop a comment in the box below (1000 characters max). Feel free to provide a way of contacting you back.

All graphics are home made and CC0.

Shooting Pactris plays sounds from all these sources: